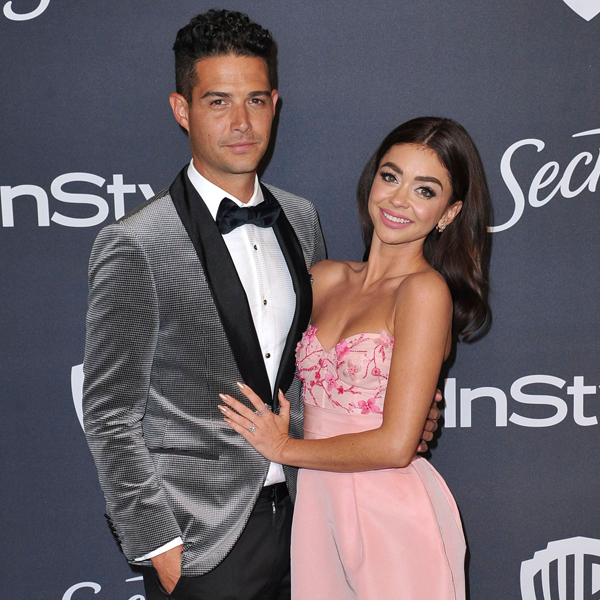 Talk about dating your best friend.

“A kiss, two VERY professional models, and an anniversary: A series [red heart emoji],” the Modern Family actress wrote. “Three years ago I asked you when YOU were going to ask ME to be your girlfriend. Now we’re engaged and in the midst of surviving a global pandemic. There’s no one else I’d rather be quarantining with.”

The 29-year-old actress gushed further, “Being with you literally 24/7 over the past several months has only made our relationship stronger and I’m so lucky to call you my fiancé. I love you to Pluto and back! Happy anniversary sugar balls [winking face with tongue emoji].”

Wells’ tribute, while shorter, revealed a complementary nickname and maybe even insight into the couple’s relationship.

“Happy anniversary sugar tits!” wrote the Bachelor Nation alum, “The list of things I love about you is longer than my tongue [tongue out emoji][zipped mouth emoji] love you +1 anything you say. @sarahhyland.”

I would really love you to Leave a Reply and let me know what other content you would like from me. Thank You! Cancel reply

This site uses Akismet to reduce spam. Learn how your comment data is processed.

HOW TO MAKE MONEY ON FIVERR AS A FREELANCER

HOW TO MAKE MONEY ON FIVERR AS A FREELANCER Fiverr is a site where you can make money as a freelancer. Fiverr has both active...

You can find out more about which cookies we are using or switch them off in settings.

This website uses cookies so that we can provide you with the best user experience possible. Cookie information is stored in your browser and performs functions such as recognising you when you return to our website and helping our team to understand which sections of the website you find most interesting and useful.

Strictly Necessary Cookie should be enabled at all times so that we can save your preferences for cookie settings.

If you disable this cookie, we will not be able to save your preferences. This means that every time you visit this website you will need to enable or disable cookies again.